We knew straight from the beginning: Only where existing beliefs and barriers are being destroyed, room for a new approach to high piste performance is being created. The result is named DISRUPTION and combines three new technologies. Dark Matter Damping, Titanal I-Beam and PowerWall represent stability in speed, variability in turning and unbeatable edge contact at all times. Get the speed and control you’ve always wanted on icy slopes in the morning, as well as the smooth show-off between slushy moguls in the afternoon – even freeriders will turn into piste junkies with the new DISRUPTION on a no-powder day.

To celebrate the launch of the new DISRUPTION line, K2 delivered on a legendary DISRUPTION CUP in Garmisch-Partenkirchen in January 2020. You may picture the K2-style ski race like this: hammer drop, steep turns and perfectly shaped jumps. Ex world cup racer Warner Nickerson against freeride legend Sean Pettit, ready to drop-in. Sharp edges and burning thighs all the way to the red buzzer at the finish line. Adrenalin, endorphin, serotonin – hell yeah! When can I ski the Disruption Cup again?!

When, you ask? From now on anytime by anyone – you just need a smartphone! The K2 Disruption Cup Game is available for free download in your app store, inviting skiers and snowboarders, marathon runners and couch potatoes, grandmas and neighbors, crazy geeks and hipster dudes to race against one another. Slip into the skin of Warner, Sean, Amie or Jonny and race the legendary K2 Disruption Cup. It will test your limits and challenge your nerves while you are collecting valuable points along the way. Each month, the three players with the highest score will be rewarded K2 Disruption MTi skis, K2 boots or a K2 helmet. 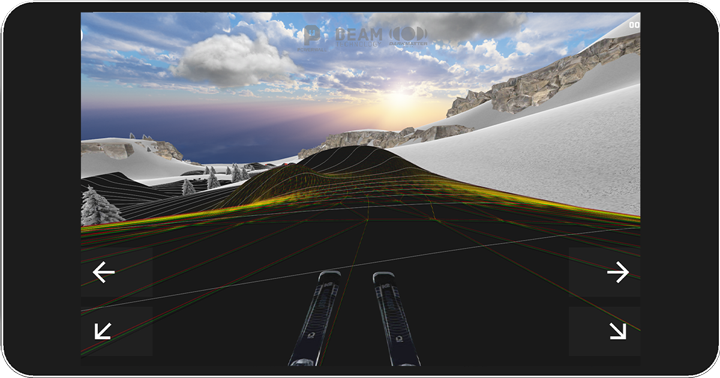 Each week, a randomly picked player will also win a K2 backpack. To increase the chance of winning, visit your nearest K2 dealer and look out for the “Disruption Boost” sticker displayed on any K2 Disruption ski.

So look at the bright side in uncertain times: you’ll need nothing more than just your smartphone to get the greatest ski experience this winter. The real fluffy stuff is just a bonus. But enough with the talking: DROP IN TO WIN!

RT @weathertoski: Snow has also returned to the #Pyrenees! This is the Pic du Midi de Bigorre in the #GrandTourmalet area. https://t.co/9Yh… about 18 hours ago
Repost: Ski Holiday Advice https://t.co/EPOdRs9Jlc about 3 days ago
RT: @3vallees_france: It's just 50 days until the AUDI FIS Women's Alpine Skiing World Cup comes to @courchevel… https://t.co/ETdroqXX7Q about 5 days ago
Snow.Guide @thesnowguide